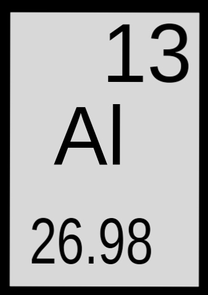 ﻿﻿Overview﻿﻿
Aluminium is found in Row 2, Group 13 of the periodic table. The periodic table is a chart that shows how the chemical elements are related to each other. Elements in the same column usually have similar chemical properties. The first element in this group is boron. However, boron is very different from all other members of the family. Therefore, group 13 is known as the aluminium family.

Aluminium is the third most abundant element in the Earths crust, falling behind oxygen and silicon. It is the most abundant metal. It is somewhat surprising, then, that aluminum was not discovered until relatively late in human history. Aluminium occurs naturally only in compounds, never as a pure metal. Removing aluminum from its compounds is quite difficult. An inexpensive method for producing pure aluminium was not developed until 1886.The abundance of aluminium in the Earth's crust is estimated to be about 8.8 percent. It occurs in many different minerals.Bauxite, a complicated mixture of compounds consisting of aluminium, oxygen, and other elements, is the primary commercial source for aluminum.Large reserves of bauxite are found in Australia, Brazil, Guinea, Jamaica, Russia, and the United States.
SYMBOL
Al

Today it is the most widely used metal in the world after iron. It is used in the manufacture of automobiles, packaging materials, electrical equipment, machinery, and building construction. Aluminium is also ideal for beer and soft drink cans and foil because it can be melted and reused, or recycled.

Discovery and naming
Aluminium was named for one its most important compounds, alum. Alum is a compound of potassium,aluminum, sulfur, and oxygen. The chemical name is potassium aluminium sulfate, KAl(SO4)2.

No one is sure when alum was first used by humans. The ancient Greeks and Romans were familiar with the compound alum. It was mined in early Greece where it was sold to the Turks. The Turks used the compound to make a beautiful dye known as Turkey red. Records indicate that the Romans were using alum as early as the first century B.C.

These early people used alum as an astringent and as a mordant. An astringent is a chemical that causes skin to pull together. Sprinkling alum over a cut causes the skin to close over the cut and start its healing. A mordant is used in dyeing cloth. Few natural dyes stick directly to cloth. A mordant bonds to the cloth and the dye bonds to the mordant.

Over time, chemists gradually began to realize that alum might contain a new element. In the mid-1700s, German chemist Andreas Sigismund Marggraf (1709-82) claimed to have found a new "earth" called alumina in alum. But he was unable to remove a pure metal from alum.

The first person to accomplish that task was Danish chemist and physicist Hans Christian Oersted (1777-1851). Oersted heated a combination of alumina and potassium amalgam. An amalgam is an alloy of a metal and mercury. In this reaction, Oersted produced an aluminum amalgam—aluminum metal in combination with mercury. He was unable, however, to separate the aluminium from the mercury.

Pure aluminium metal was finally produced in 1827 by German chemist Friedrich Wöhler (1800-82). Wöhler used a method perfected by English chemist Sir Humphry Davy (1778-1829), who succeeded in isolating several elements during his life-time. (See sidebar on Davy in the calcium entry.) Wöhler heated a mixture of aluminum chloride and potassium metal. Being more active, the potassium replaces the aluminium, as shown by the following:

The pure aluminium can then be collected as a gray powder, which must be melted to produce the shiny aluminum that is most familiar to consumers.

After Wöhler's work, it was possible, but very expensive, to produce pure aluminium. It cost so much that there were almost no commercial uses for it
Precious metal? Before chemists developed inexpensive ways to produce pure aluminIum, it was considered a somewhat precious metal. In fact, in 1855, a bar of pure aluminum metal was displayed at the Paris Exposition. It was placed next to the French crown jewels!

A number of chemists realized how important it was to find a less expensive way to prepare aluminium. In 1883, Russian chemist V. A. Tyurin found a less expensive way to produce pure aluminium. He passed an electric current through a molten (melted) mixture of cryolite and sodium chloride (ordinary table salt). Cryolite is sodium aluminium fluoride (Na3AlF6). Over the next few years, similar methods for isolating aluminium were developed by other chemists in Europe.

The most dramatic breakthrough in aluminium research was made by a college student in the United States. Charles Martin Hall (1863-1914) was a student at Oberlin College in Oberlin, Ohio, when he became interested in the problem of producing aluminium. Using homemade equipment in a woodshed behind his home, he achieved success by passing an electric current through a molten mixture of cryolite and aluminium oxide (Al2O3).

Hall's method was far cheaper than any previous method. After his discovery, the price of aluminium fell from about $20/kg ($10/lb) to less than $1/kg (about $.40/lb). Hall's research changed aluminium from a semi-precious metal to one that could be used for many everyday products.

Physical properties
Aluminium is a silver-like metal with a slightly bluish tint. It has a melting point of 660°C (1,220°F) and a boiling point of 2,327-2,450°C (4,221-4,442°F). The density is 2.708 grams per cubic centimeter. Aluminium is both ductile and malleable. Ductile means capable of being pulled into thin wires. Malleable means capable of being hammered into thin sheets.

Aluminum is an excellent conductor of electricity. Silver and copper are better conductors than aluminium but are much more expensive. Engineers are looking for ways to use aluminium more often in electrical equipment because of its lower costs.

Chemical properties
Aluminium has one interesting and very useful property. In moist air, it combines slowly with oxygen to form aluminum oxide:

Aluminium is a fairly active metal. It reacts with many hot acids. It also reacts with alkalis. An alkali is a chemical with properties opposite those of an acid. Sodium hydroxide (common lye) and limewater are examples of alkalis. It is unusual for an element to react with both acids and alkalis. Such elements are said to be amphoteric.

Aluminium also reacts quickly with hot water. In powdered form, it catches fire quickly when exposed to a flame.

Aluminium has six radioactive isotopes. A radioactive isotope gives off either energy or subatomic particles in order to reduce the atomic mass and become stable. When the emission produces a change in the number of protons, the atom is no longer the same element. The particles and energy emitted from the nucleus are called radiation. The process of decaying from one element into another is known as radioactive decay.

No radioactive isotope of aluminium has any commercial use.

Extraction
Aluminium production is a two-step process. First, aluminium oxide is separated from bauxite by the Bayer process. In this process, bauxite is mixed with sodium hydroxide (NaOH), which dissolves the aluminum oxide. The other compounds in bauxite are left behind.

The aluminium oxide is then treated with a process similar to the Hall method. There is not enough natural cryolite to make all the aluminum needed, so synthetic (artificial) cryolite is manufactured for this purpose. The chemical reaction is the same with synthetic cryolite as with natural cryolite. About 21 million metric tons of aluminium were produced in 1996 by this two-stage process.

Uses
Aluminum is used as pure metal, in alloys, and in a variety of compounds. An alloy is made by melting and then mixing two or more metals. The mixture has properties different from those of the individual metals. Aluminium alloys are classified in numbered series according to the other elements they contain.

The 1000 classification is reserved for alloys of nearly pure aluminium metal. They tend to be less strong than other alloys of aluminum, however. These metals are used in the structural parts of buildings, as decorative trim, in chemical equipment, and as heat reflectors.

The 2000 series are alloys of copper and aluminum. They are very strong, are corrosion (rust) resistant, and can be machined, or worked with, very easily. Some applications of 2000 series aluminium alloys are in truck paneling and structural parts of aircraft.

The 3000 series is made up of alloys of aluminium and manganese. These alloys are not as strong as the 2000 series, but they also have good machinability. Alloys in this series are used for cooking utensils, storage tanks, aluminium furniture, highway signs, and roofing.

Alloys in the 4000 series contain silicon. They have low melting points and are used to make solders and to add gray coloring to metal. Solders are low-melting alloys used to join two metals to each other. The 5000, 6000, and 7000 series include alloys consisting of magnesium, both magnesium and silicon, and zinc,respectively. These are used in ship and boat production, parts for cranes and gun mounts, bridges, structural parts in buildings, automobile parts, and aircraft components.

A large use of aluminium is in the transportation industry. Car and truck manufacturers like aluminium and aluminum alloys because they are very strong, yet lightweight. Companies are using more aluminium products in electric cars. These cars must be lightweight in order to conserve battery power.

Aluminium produced finds its way into packaging. Aluminum foil, beer and soft drink cans, paint tubes, and containers for home products such as aerosol sprays are all made from aluminium.

Aluminium goes into building and construction.Aluminium extrusions being predominant in Windows and door frames, screens, roofing, and siding, as well as the construction of mobile homes and structural parts of buildings which rely on aluminium
Aluminum and aluminium extrusions go into a staggering range of products, including electrical wires and appliances, automobile engines, heating and cooling systems, bridges, vacuum cleaners, kitchen utensils, garden furniture, heavy machinery, and specialized chemical equipment.
Return to Home page